What to see and do in delightful Dedham

Whatever the time of year, Dedham is a draw for daytrippers looking to enjoy the stunning scenery that has inspired some of the country’s greatest landscape artists. Petra Hornsby finds her own inspiration for a festive visit

Dedham, situated on the North Essex/Suffolk border, is one of the most picturesque spots in the county as well as being highly regarded nationally and even globally.

Whatever the season, this charming and well-served village is a joy to visit and for many people has proved the perfect place to retire to or to commute from, thanks to its excellent transport links via the A12 and trains into London from the station at Manningtree just a few miles away.

The village sits in a designated Area of Outstanding Natural Beauty (AONB) and this classification has certainly helped preserve and protect its many natural charms.

The traditional lowland landscape features grasslands, flower meadows, ancient woodlands and hedgerows, all of which provide the perfect habitat for many different species of local wildlife.

Agriculture is also a key feature of the landscape with arable fields and livestock farming adding to the rich natural tableaux that surrounds Dedham.

The River Stour divides Essex from Suffolk, right on the edge of the village, and visitors can hire a vessel from The Boathouse restaurant and row at a gentle pace to Flatford Mill.

There are also some fantastic walks that follow the river's path that go beyond Flatford and on into East Bergholt or Manningtree.

The local scenery is famous for being painted by two English masters, John Constable and Thomas Gainsborough.

Constable, a 19th century Romantic artist, lived in neighbouring East Bergholt and every morning would walk to attend school at the Dedham Grammar School.

In many ways, the landscape is unchanged and quite recognisable in scenes such as The Hay Wain and Dedham Lock and Mill.

Although perhaps more famous for his portraits of the aristocracy, quite often set outdoors with a natural backdrop, Thomas Gainsborough − who was from Sudbury in Suffolk and whose work preceded Constable − was inspired to paint the local landscape too.

Famous equestrian painter and former president of the Royal Academy, Alfred Munnings, made Dedham his home and Castle House is a great place to visit to view many of his paintings and to experience his garden studio which has been preserved as he left it. 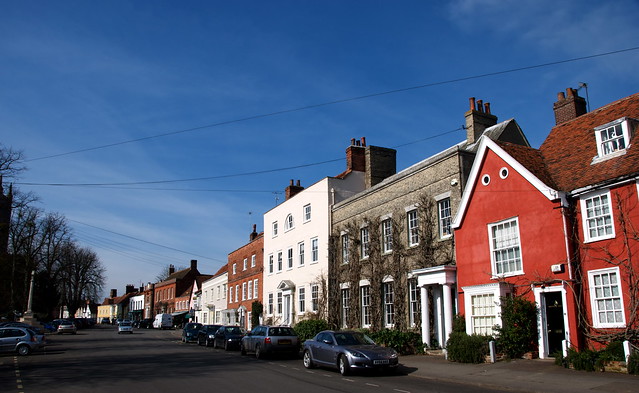 Today, the village has a population of around 2,000 and is a tourist's delight. As well as river walks, Dedham has a thriving arts and crafts centre, pubs, one of the oldest tea rooms in the county (The Essex Rose) and award-winning restaurants.

The high street has some fascinating houses that date back to the days when the town was a thriving centre of the local wool industry. Villagers can join the cricket, football or tennis clubs and partake in local culture by joining the Dedham Art Society or the Dedham Players.

There is also a school in the village, which Ofsted has classed as 'outstanding' in overall effectiveness and quality of teaching.

Dedham also has strong links with the USA, with its namesake situated in Massachusetts. In 1635, a group of dissenters set sail to establish a colony there, influenced by the preacher John Rogers.

Known as a Puritan clergyman, he delivered his religious lectures in what was regarded as a rather loud and fearsome style, earning him the title 'Roaring' John Rogers.

A lecturer in Dedham for over 30 years, he was capable of preaching to a congregation that 'overflowed' from the pews and was regarded as being both rousing and refreshing, often moving people to tears with his words, either for joy or repentance.

He died in 1636 and is buried in the churchyard; there is a mural monument to him located on the north wall of the sanctuary.

Early editions of his work can be found in the muniment room above the north porch.

Meanwhile, one of the nave pews in the village church is dedicated to the people of Dedham, Massachusetts, many of which can trace their ancestry back to Essex.

Dedham's parish church, St Mary's, dominates the village centre, making it a pivotal feature of village life. The present building dates back to 1492 but there has been a church in Dedham since at least 1322.

The church entrance features a striking carved panelled doorway and the impressive interior has stained glass windows by the noted Kempe Workshop. John Constable's Ascension is also displayed in the church.

The church regularly opens its towers to visitors who, once at the top of the 131ft high structure, can enjoy the full beauty of the surrounding countryside.

Naturally at Christmas, the church is the obvious place for people to come together to worship, give thanks, to gather and to celebrate.

Last year, as in previous years, the church hosted a Christmas Tree Festival which has proved to be very popular in other churches and cathedrals across the country.

The inventive and colourful displays provide quite a spectacle and the festival provides a wonderful opportunity for groups to get involved and submit their tree designs.

The event is a competition with several different categories; it provides a chance to be creative, to be topical or to submit a delightful arrangement.

Once again, the village high street was lined with stalls, manned by local residents and parents of Dedham Primary School children, selling festive goodies, crafts and tasty treats to help raise funds for Dedham Primary School as well as bringing 'glad tidings of comfort and joy' to all wanting to kick start their own seasonal agenda.

Whether pulling on wellies and walking boots for a hearty winter's ramble or heading for one of the eateries for a pot of tea or a three-course meal, Dedham is a picture of natural delights, peace, tranquility and architectural joys.